The Longest Bicycle Path in the World

Mere days after returning back from my trek across Iceland I was itching for adventure once again. In a panic to go somewhere I ended up rushing into a 4 day trip to Scotland, attempting to bike the Capital Trail. That didn’t end so well and it went against the lesson I learnt in Iceland, don’t rush!

With all my vacation spent, I had the chance to dream big for what I’d be doing next year. Allotted 3 weeks of vacation, I needed a destination that was small enough that I could explore it relatively throughly within that time. Again I began looking at other island countries. After a tough battle between New Zealand and Korea, Korea won me over with the promise of sights, sounds and tastes that were completely foreign to me. The huge amount of possibility and the chance for discovery hooked me in as well as realizing they had invested heavily into cycling infrastructure. It would be an interesting change of pace coming from bikepacking on a mountain bike across Iceland and Scotland. This trip was going to be mostly on well established and paved paths.

Finding the right time to go was a little trickier than Iceland. The climate in Korea varies drastically due to the presence of the monsoon season. Just as I wanted to avoid being turned into a popsicle in Icelandic weather, I also want to avoid being drenched in continuous rain whilst in Korea.

I decided I wanted to go in May. Many blogs suggested Autumn as the best season to visit with less crowds but I couldn’t hold off for that long. Another risk that I came across was Asian Dust. I had always heard about the pollution in China but never any media reports of the clouds that hit Korea and Japan every year. Talking with a friend who lives there currently he said air quality had been at a record low during the month of March! Despite this I was not discouraged and went ahead with planning my excursion.

There seems to be a largish jump in ticket prices at the start of May so I booked my tickets for the last weekend of April with Korean Air. One of the benefits of the many asian airlines is that they take bikes free of charge! This was perfect compared to instead of potentially paying $150 CAD each way if I took the local Canadian airline, Air Canada. The last fun bit about the actual the flight that I discovered was the path it takes from Toronto. Apparently it flies over northwards instead of across the pacific ocean! My original plan was pretty simple. Take full advantage of the 4 Rivers Bike Path which goes from the capital Seoul to the southern metropolis of Busan. This it self was approximately 600km. Finding information in English for this was a little tougher than I anticipated. They have an official English portal that provides some basic information but nothing jumps out with gpx files or really useful insight.

Here is the part where I share all my hard work for you folks. The above companion site is disjointed and it’s hard to get a clear picture of what Korea is fully offering. These following maps are perfect for getting a overhead view of the massive system. The next colourful map illustrates the paths as they existed as of 2015 with tons of extra shit. The end all and be all for navigating across the country, a very lucky find! Each path has a series of booths alongside it (marked in red above) that look like an english telephone booth: 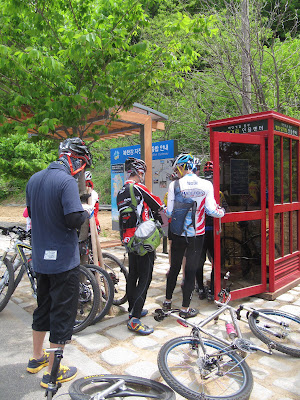 You can pickup a bike passport and collect stamps at each of these certification centres as you travel, to prove that you actually did bike across a country!

The last major resource I used to plan the backbone of my trip was this fantastic blog: Across Korea on a bicycle. I won’t waste time repeating what Hajo has to say, just go and read it! He covers everything you could want to know as a rookie going to Korea for the first time. The main use of his blog for me was the gpx files he had of his entire trip. They allowed me to plot my desired route from Seoul-Busan-along the east coast-then west back along near the DMZ.

All in all this is what my tentative plan looks like: The purple route is basically a combination of the gpx routes Hajo provided. I collected a bunch of other routes from a local cycling association and mapped some deviations from the loop, like the east tip from Pohang. If you open the full version of the map you can see all details of these others routes. The pins are a selection of attractions that I curated from way too many hours of pouring over hundreds of blogs. Click around and google a few to see if they interest you.

All in all, the purple route plus a loop of Jeju island in the south (which is about another 230km) puts the trip total around 1800km. Totally doable in 20+ days of cycling while giving enough breathing room to actually stop along the way and spend time in some of the cities.

Table of all items and weights

Items missing in the photos are: bike lock, ac converter, credit card, zip ties, 4L dry bag for clothes, a few ziplock bags and the Sony Rx100 camera which was used to take these photos.

Everything packed on the bike

The Korean alphabet is very short and concise. In a couple of afternoons you can teach yourself how to read and pronounce any word! I swear I'm not lying!

The benefits should be immediately obvious. Reading the signage to follow the route, to order food that you are really craving and because learning is fun.

Here is how I did it over 3 nights:

Now make a list of some phrases that will come in handy, like 'please give me water' and you'll have a great time. If the language gets too confusing, I found that the learning combined vowels isn't necessary. They don't show up that often and you can usually get away with not being able to read them at all (I know I couldn't).

The dust in the air is real. 90% of cyclists you see with be covering their face to protect against the aforementioned Asian Dust and the strong sun. Don't throw your health away.

Plan on how to get to and from the airport with your bicycle:

If it's a weekend use the AREX train, otherwise you might need to do some more planning. Just a friendly heads up!

Here are two more links that I have laying around that you might find some use of:
Link 1: more general info for trip planning
Link 2: beautiful places to visit in Korea

And that's all I have. A beautiful country awaits with a tumultuous history, never ending paved bicycle paths and delicious food! See you on the road.

Day by day journal of the trip:
Next Story